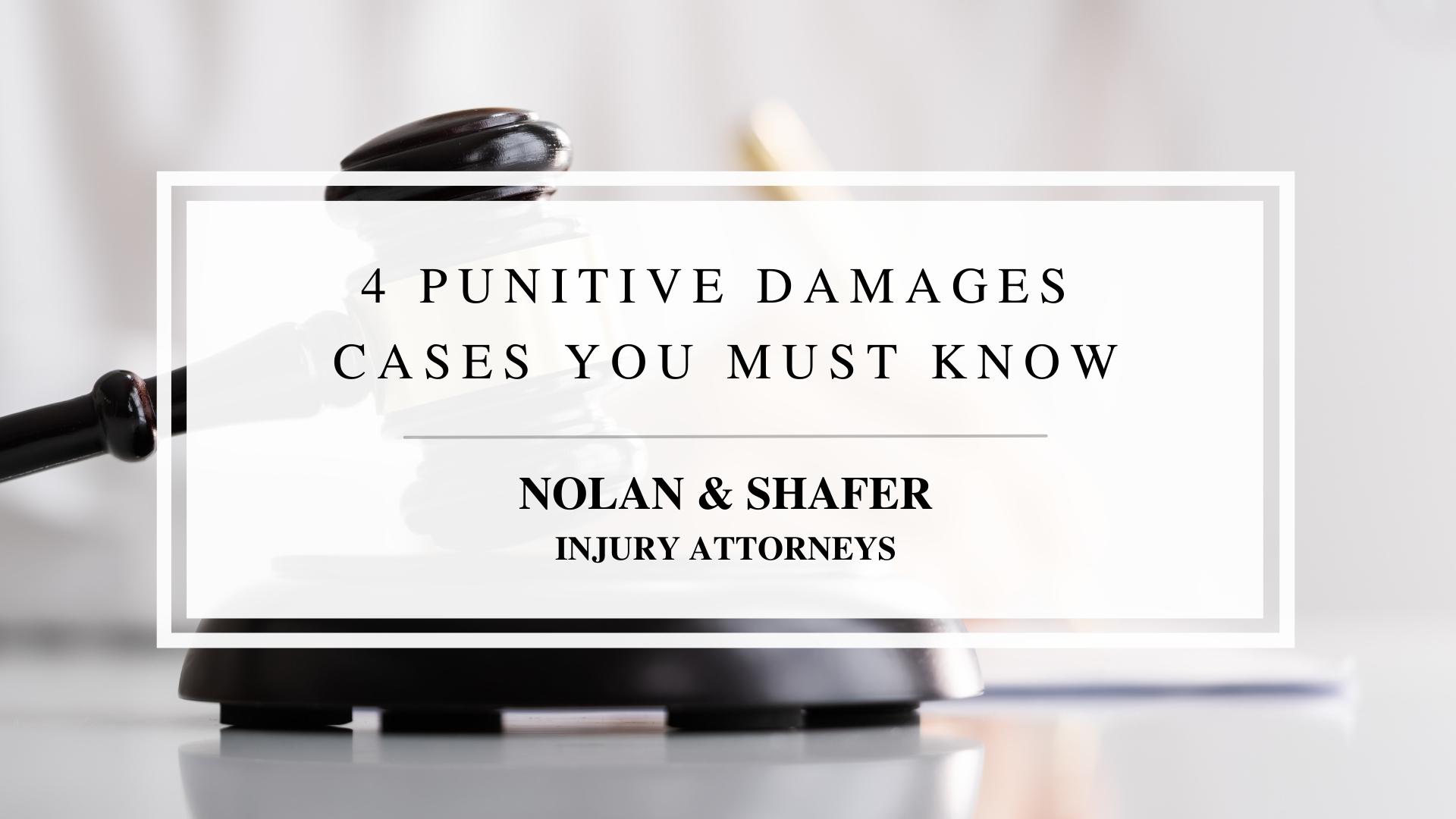 What Is a Punitive Damage Case

Punitive damages are compensation awarded in personal injury cases in addition to actual damages. They are considered a punishment for the defendant for harmful and malicious actions and warn the public not to do the same.

In Michigan, however, punitive or exemplary damages are awarded not as punishment but as a way to make the injured plaintiff “whole.” It compensates for the humiliation, anguish, or “injury to the feelings” due to the defendant’s intentional and malicious actions. In theory, Michigan awards exemplary damages when the defendant’s actions aggravated the actual injury by harming the victim’s feelings.

Here are some famous punitive damages cases that have helped define the statute through the years.

This is one of the famous punitive damage cases highlighting Michigan’s definition of exemplary damage as having a malicious and willful intent to cause mental and emotional distress.

When Michael McPeak was nearing his death due to a malignant brain tumor in 1992, he changed the beneficiaries of his insurance policy from his first wife’s daughters (the plaintiff) to his second wife (the defendant). The plaintiff alleged that the defendant influenced McPeak to make the changes when he was no longer mentally capable.

This medical malpractice case is one of Michigan’s most famous punitive damage cases. The Supreme Court overturned a jury’s award of $350,000 in exemplary damages due to redundancy between exemplary and compensatory damages.

In 1972, Anna Veselenak (the plaintiff) had Dr. Sidney Smith, Dr. Choi, and Dr. Nobel (the defendants) perform emergency surgery due to her worsening condition of chronic gastrointestinal bleeding. It was not until after two years and numerous complaints of pain that Dr. Smith finally ordered abdominal x-rays, which revealed that the plaintiff didn’t have cancer but had a 6-1/2-inch-long hemostat accidentally left inside her abdominal cavity after the surgery.

Ultimately, the Michigan Supreme Court decided that a plaintiff should not receive compensation twice for her mental anguish and distress. All “injury to the feelings” is already part of the compensatory damages. 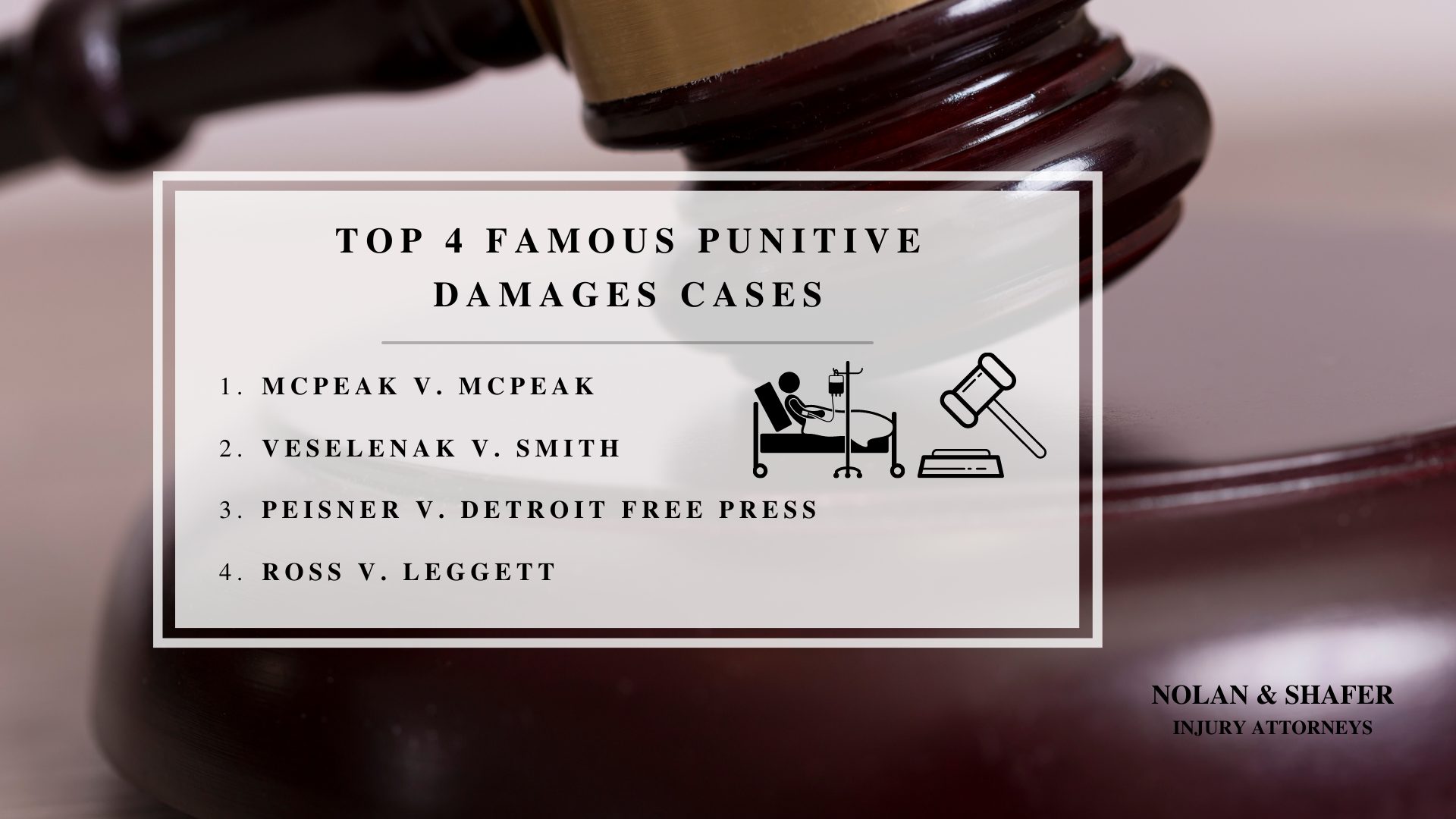 This is one of the famous punitive damage cases that demonstrated how the Michigan Supreme Court decided to award exemplary damages in addition to actual libel damages.

Atty. Balfour Peisner (the plaintiff) filed a libel case and sought punitive damages against The Detroit Free Press and its reporter Louis Heldman (the defendants) for an article accusing him of “unethical conduct.” The Court of Appeals ordered that the plaintiff could not receive two compensations for the same mental pain and anguish.

This case was among the earliest from the Michigan Supreme Court to define exemplary damages, dating back to 1886. It stems from the dispute between William C. Ross (the plaintiff) and Wells W. Leggett, the president of the Brush Electric Light Company (the defendant). When the company planted a light post on the plaintiff’s lawn, he decided to cut a few inches from the post, leading to his arrest and imprisonment.

The Michigan Supreme Court awarded exemplary damages to the plaintiff, explaining that aside from the actual damage of physical discomfort from imprisonment, he suffered “shame, mortification, outrage, and disgrace.”

Punitive damages cases in Michigan can be very complex and hard to win. But don’t lose hope; getting a skilled Michigan mini-tort lawyer or a Muskegon personal injury lawyer could make a big difference in your case. Trust Nolan & Shafer to keep you on track and help you win that case. Reach us here or call (231) 722-2444 to schedule an appointment.